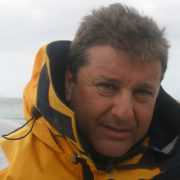 Claude Chapuis met Joseph Strazzanti in 1996 when he decided to organize the 1st AIDA world championship.
Even if Claude was managing  group with Loic Leferme, Pierre Frolla and later young Jedi like Guillaume Néry, without forgetting girls like Delphine Marleux, Aurore Asso, Brigitte Banegas,
Joseph being a sailor and a diver explained to the freediving school of Nice that for a world championship, few things should be done. Joseph this year just finished to organize the European windsurf championship on the “Promenade des Anglais” facing the Negresco !
So his experience has been decisive. It’s him who thought that an important administration called today the Departmental Council of the Alpes-Maritimes, could help successfully this amazing group of freedivers.
This administration always stayed since that date the main partner of all world championships organized in Villefranche sur Mer playing in such a partnership an important role of all freediving world championships success in the South of France.
Thanks to Joseph and all volunteers he succeeds to find at each championship.
https://aida-wc2019.com/wp-content/uploads/2018/07/jstrazzanti-452.jpg 400 600 admin https://aida-wc2019.com/wp-content/uploads/2019/03/logo-wc.png admin2018-07-31 21:53:042019-04-02 11:00:32Do you know this man ?
Scroll to top